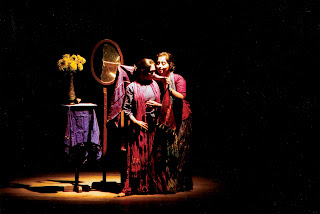 Thursday, 17 March 2011, 7pm
Gyan Manch, Kolkata
CROSSINGS
exploring the facets of Lady Macbeth
Four performers represent facets of Lady Macbeth in constant conflict to create a fluid performance woven from four strands – a verbal text constructed from the dialogue of the original play, a movement text drawing from dance, a musical text created in response to both words and movement, and a symbolic text crafted from the imagery in Macbeth and the symbolism which imbues Indian classical dance.
With references to figures from Indian mythology such as Putana and Shakti, this piece examines what it means to be feminine or de-feminised through the contradictions within this complex character.
First presented as a workshop production in April 2004 with the support of a Fellowship Grant from the Ministry of HRD, Government of India. Winner of 4 Awards at the first Mahindra Excellence in Theatre Awards, Delhi, 2006, Crossings was last performed in Calcutta in December 2007, and has since been revised with a new cast.
“Spellbinding!”
Hindustan Times, Kolkata: December 2007
“an extremely interesting and captivating piece of genuine dance theatre”
Mumbai Mirror: January 2011

An elegant old empty house, marble floors, candle-lit, cavernous. 20 audience members tip-toed into this alien space for each show. They had entered the world of Ranan’s Crossings; they had intruded into Lady Macbeth’s personal and mental space. And that was how the first shows of Crossings took place.  Four performers clashed in Shakespearian dialogue; swirls of Kathak and Bharat Natyam underlined the urgency of Lady Macbeth’s uneasy mind. And finally the despairing moves of a Manipuri dancer. Darkness and flames drew in both audience and performers into another time and space. Into someone else’s world.
[March 2011]


The first time I watched Ranan’s Crossings was at Max Mueler Bhavan in Calcutta sometime in 2005.
It excited me then because it was one of the first times I had experienced a dance-theatre piece, and a dance-theatre interpretations of a text I had read in school.
It opened up for me, then, the concept of representing an interpretation in a style that was almost unique.
Since then I have watched other productions from Ranan (Nagamandala, Equus), that were directed by Vikram – and it made me feel that Vikram and Ranan were on a mission to explore, and create through, this unique style that has heavy value in terms of the ownership of creating a space for some great texts.
I had the pleasure of revisiting Crossings at a venue that I hold very close to my heart. The NCPA Experimental in Mumbai.
At first I was just looking forward to revisit a production from my home-town, and contribute to it as a production hand in any way possible.
It started out just like that till I decided to be audience once again when the ‘curtains’ went up.
The cast had changed. The performance had completely changed from whatever I remembered of it. The ‘script’ had developed and reworked itself almost in the sense that it wasn’t like watching an improve piece but you knew that the understanding and redevelopment of the piece came from constant hard-thinking direction and imrov.
The performance was focused on form and the true interpretation of the piece by its performers, or performance if I may.
Not on the language that was being spoken or the props that were being used.
Of course they carry intrinsic meaning on the large scheme of things – but the mellifluity with which they were now woven into Vikram’s style of dance-theatre was impeccable.
The references or inspirations that he draws from our culture are not out there in your face but you identify with them on a more personal level.
From the production value aspect, the sets were stylish and extremely functional. The light design is neat and the execution very clean and defined. The colours used, and the sheer beauty of fire added multiple layers to the sets in terms of feeling.
Crossings, to me, has become a great defining point in terms of what it means to own a style and space. Kudos to Ranan for being bold to do it and keep doing it and keep exploring it and keep taking it to new points of getting high on it.
Needless to say Crossings owns the space when it goes there.

[Harsh Khorana is a young actor and theatre worker, presently based in Mumbai] 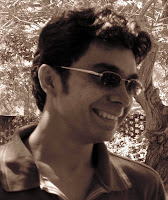 
[compiled from Director Vikram Iyengar’s National Junior Fellowship report (May 2005) and production notes]
What do dancers come equipped with? Their bodies, a vocabulary of movement, a language of gesture and expression, codes of communication—some easily decipherable, some hopelessly obscure as far as the lay audience is concerned. How did one go about making things clear for an audience uninitiated into the codes of classical dance? How, in fact, was it possible to interpret Lady Macbeth through classical dance? After all, she does not fit into the mould of any Nayika that we dancers are familiar with. Did that mean that our dance forms could not or would not sustain her? Was there no way in which we could create the essential power of this character through what our forms offered and worked with?

On Images and Icons

The large majority of the early notes I had made of skeletal sequences and ideas were based on a visual image, either as an impulse or as a goal. Very few of them dealt with issues of character development, plot, narrative (linear or otherwise) or any sort of line-through to thread the piece on. It was very much a dancer thinking.
Where I did think of character rather than visual image, it was to visualize an icon, a mythic figure which represented or symbolized a mood or emotion. Again, this is a dancer thinking: not only that, it is an Indian classical dancer thinking, drawing from the exhaustive resource bank of iconography that we carry with us and refer to almost as second nature.

Putana (from the Mahabharata) and Lady Macbeth

What had Putana sworn to? What were her feelings as she approached Krishna, the baby? Resolute (like Lady Macbeth approaching Duncan?)? The transformation from unfeeling rakshasi to a woman with maternal feelings came only at the sight of Krishna (similar to Lady Macbeth when she feels Duncan looks like her father?), she becomes a mother, a nurturer. But she has ‘sworn’ to destroy Krishna. She must nurture him in order to destroy him. Her milk is gall. She cannot ‘unsex’ herself, her female gender, her femininity, the grace that she adorns herself with are vital for her “fell purpose”. Here, the “compunctious visitings of [human/feminine] nature” are essential to convert her from a repulsive creature to a maternal nurse: she is woman. In that transformation, she finds herself. But foresworn as she is to Kansa, that transformation also necessarily destroys her. Maybe it is not Krishna’s act of sucking the life out of her, it is her inability to take his life through the very process that nurtures it that kills her. Her only option is to draw the gall from her breasts into her own body, slowly poisoning herself rather than poisoning him. Like Lady Macbeth, she implodes: the effort to kill, kills her.
-         Notes, 31 October 2003
The ‘Unsex Me Here’ speech – an invocation
What is an invocation in dance? What are the gestures and patterns of movement that are used? How much is representational and/or descriptive? What are the predominant moods we try to create? Are there any specific structures we follow in the development of an invocation? Where else, in dance, do these movements re-appear, where not?
What is auspicious, what is not? How can symbols of auspicious-ness be converted to inauspicious ones? What is in/auspicious for who in the group?
How does one invoke/invite the spirits/Duncan? Ways of expressing the word “Come [you spirits]” in dance—as guests, plead, invite, gracious, as a hostess, to a child, to a lover, seductive, prayerful, commanding, with pleasure, expectant, fearful, a virgin bride …
-         Rehearsal notes, 7/8/9 January 2004
An invocation in a very different way—using the same recognizable gestures and motifs that had by now assumed bloody hues—to pay obeisance to the dead Duncan. The dancer used the astonishing sense that Manipuri has of walking on air, moving as though through water to convey a devastating atmosphere of shock and heart-rending loss. She seems to be in a trance, offering flowers to the dead body, purifying the space around it through the very gestures and actions that had served to make the space impure and corrupt.
On Shringar
The image of a woman decking herself up for her beloved, the sensuousness of applying fragrant chandan, oiling and tying her hair, choosing and adorning herself with attractive jewellery create an intense aura of the erotic that poets, lyricists and, of course, dancers have revelled in. Shringar is therefore an act of union, an act of fulfilment, an act where all our positive energies shine through, an act which reiterates our humanity. It is an act of life. The question was how could we make this an act of death?
Macbeth is peppered with references to disguising one’s true intentions, of presenting a false face, of hiding one’s true self behind a façade. This threw up the idea of mirror images—one true, one false. Which is which?
The external Lady Macbeth figure doing up her eyes. Eyes as windows to the soul—they must be disguised perfectly to ‘look like the time’. But how much can we disguise? How much will the inner eyes allow? When will they emerge? Again, which eyes are emerging?
Three layers of this figure—the external, the evil, the moral. When does which one exert itself? What can an act of refusal by any one of them mean? Is it possible to blur which of the three performers symbolises which of the three selves, to have them morph? How?
Who is the self we ultimately see? Who is the self who rises from the dressing table? Who is the self who walks down the corridors? Who is the self who actually arrives? Who is the self who greets? Who is the self who is murderous? Who is the self who is a hostess? Who is the self who is vulnerable? Who is the self who is dependable? Who is the self who is heartless? Who is the self who is maternal? Who is the self?
-         Rehearsal notes, 12 January 2004

Shringar—a preparation that is not aimed at becoming beautiful, but at ‘unsexing’ once and for all. The image of two dancers mirroring each other: the gracefully subtle movements of the limbs in Kathak with the powerful and definite movements of Bharatnatyam, so that one could be watching both a ‘Nayika’ revelling in the success of her Shringar / disguise or a murderess flexing her muscles, readying herself for the bloody act.
[all photographs for the above section are by Mani and from the Crossings performance at the 'Hamara Shakespeare' festival, Kalakshetra, Chennai - February 2011]